Unexpected formation fluid influxes, also known as kicks, indicate the onset of a loss of well control. Even relatively low intensity kick events are responsible for substantial economic impacts to the oil and gas industry. Kicks are also dynamic events that can increase in intensity until a complete loss of well control occurs—a condition also known as a blowout. Blowouts allow petroleum to be released, which can result in considerable damage to human life, materials, and long-lasting environmental damage. One of the keys to preventing blowouts is to suppress kicks immediately after they initiate, when they are at their weakest. However, current kick detection methods are uncertain and slow-developing processes that allow kicks to gain intensity, making regaining well control more difficult for the driller once they are detected. Developing an improved kick detection method that provides earlier and more certain detection is essential for reducing the frequency of well control losses.

To address this need, NETL developed a kick detection technique that uses downhole measurements to provide data on the wellbore condition. If a kick has occurred, it will be reflected in measurements that are made available to the driller much faster than the kick fluid can travel, allowing the driller to take necessary action to regain well control before the kick strengthens.

The first phase of this project verified that downhole measurements could detect a kick and provide sufficient data quickly enough for the driller to suppress a kick and regain well control. This phase of the project was completed using basic research on fluid flow, physical instruments and measurements, data telemetry, and modeling. The key outcomes of phase 1 of this project include:

This project resulted in a patent-pending, low-cost, rapid, kick detection method that can be used to improve well control and reduce drilling risks.   Through Phase 1 of this study, the technology was conceived, tested and validated using numerical and conceptual, physics-based modeling methods.

System for Kick Detection During a Drilling Operation

Kick Detection at the Bit: Low-cost Monitoring and Early Detection

NETL’s Kick technology has also been reported on in several news articles.

Explore research products that are related to this project. 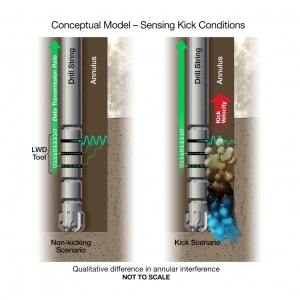