During petroleum and natural gas (PNG) production, deposits of mineral scales throughout the production facilities cause not only production losses, but also equipment damage, and enhanced corrosion leading to serious safety concerns. As oil, gas, and brine proceed from the formation to the surface, changes in the production fluid’s pressure and temperature cause certain dissolved salts to precipitate and coat production tubulars (Image), casing, valves, pumps, and downhole safety equipment. As an extreme example, in a North Sea well, production fell from 30,000 B/D to zero in just 24 hours because of scaling.

While all wells are not vulnerable to such quick scaling, there is no question that scale formation, because of the associated costs and safety issues, is an urgent problem in the oil and gas industry. Reliable thermodynamic models and databases are not available for many species relevant to scaling at high pressure high temperature (HTHP) conditions. While scaling at temperatures below 150°C is relatively well studied, scaling at HTHP conditions, such as those typically encountered in offshore ultradeep reservoirs, is a significant challenge and is poorly understood.

This project will extend scale predictions to HTHP conditions and use OLI Systems (OLI) Scale models (ScaleChem) to assist two scaling projects in progress. The ultimate objective of the project is to upgrade OLI Studio: ScaleChem software, a commercial software originally developed by Shell and redeveloped by OLI to predict mineral scale scenarios. This will be completed by transferring the newly developed computer codes to OLI personnel. The new version of OLI software will then be available to be used in industry for proactive mitigation of scaling problems at HTHP conditions during oil and gas production.

A challenge and key step in scaling prediction is the simulation of scale-water equilibrium using thermodynamic models, but this is only possible if thermodynamic properties of all phases and components are known. Yet, previous studies reveal that reliable thermodynamic models and databases are not available for many species relevant to scaling at HTHP conditions. The best method to modify the state-of the art model to further reduce the number of empirical parameters will be identified.

A combination of theoretical, computational, and experimental approaches will be undertaken to address HTHP scaling problems. Initially, currently DOE-funded projects on scaling at NETL and the Stanford Linear Accelerator Center (SLAC) National Accelerator Laboratory will be reviewed and then the existing OLI ScaleChem software will be used to assist in designing and optimizing experiments. In parallel, the unique HTHP phase composition facility at NETL will be used to experimentally study thermodynamic properties relevant to scaling at HTHP conditions and visualize mineral scales by varying the temperatures and pressures. The necessary thermodynamic algorithm needed for simulating scaling in conditions representative of ultradeep offshore oil and natural gas reservoirs will then be developed. The objective is to implement this algorithm into OLI Studio: ScaleChem.

OLI Studio: ScaleChem software has been successfully used in the oil and gas industry to predict possible scale formation and its mitigation. This project will provide an updated version of OLI Studio: ScaleChem software to industrial users along with information on the updates and new capabilities. This newly developed software can then be used as the first step in the scale prevention for safe and reliable operation in the offshore oil and natural gas production in HPHT environments.

Research products are being developed and will be posted here when publicly available.

Explore research products that are related to this project. 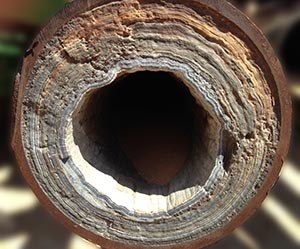 Scale in Flow Line – Pipe is contaminated with Barium Sulfate.